COPC contributed approximately RMB 140,000. An additional donation to the company’s former contribution to the China Soong Ching Ling Foundation in February. The funds will be used to procure personal protective equipment for Zhongshan Hospital in Wuhan. COPC employees donated half of this amount, which the company matched. The second round of support raises COPC’s total contribution to approximately RMB 2,140,000.

“I am proud that the majority of our employees contributed donations to support coronavirus relief efforts,” said Bill Arnold, the president of COPC. “We extend our heartfelt sympathy to the Chinese people who have been affected by the outbreak, as well as to the medical workers battling the epidemic on the front-line. We sincerely hope for the complete recovery of those who have fallen ill and for the successful eradication of the virus as soon as possible.”

“Since the outbreak began, we have closely monitored the situation and prioritized the well-being of our employees and their families. We are committed to being good neighbors and responsible corporate citizens, and continuing giving back to the communities where we operate,” Arnold said.

On Feb. 8, when COPC made its first donation of $286,000 USD (approximately RMB 2 million) to the China Soong Ching Ling Foundation, the funds targeted three county-level hospitals in Xishui county in Huanggang, Danjiangkou in Shiyan city, and Qianjiang. These are smaller areas in Hubei province that have been hit hard by the epidemic and face a severe shortage of medical resources and funding while receiving relatively less public attention and charitable donations. As of Feb. 27, COPC’s donation has allowed the three hospitals to procure five non-invasive ventilation machines, 109 air disinfecting machines, 59,010 face masks, 21,600 gloves, 3900 medical caps, 130 sets of personal protective equipment and similar items. These supplies have been put into use already. The donation also provided subsidies to support the work of 134 front-line medical workers. 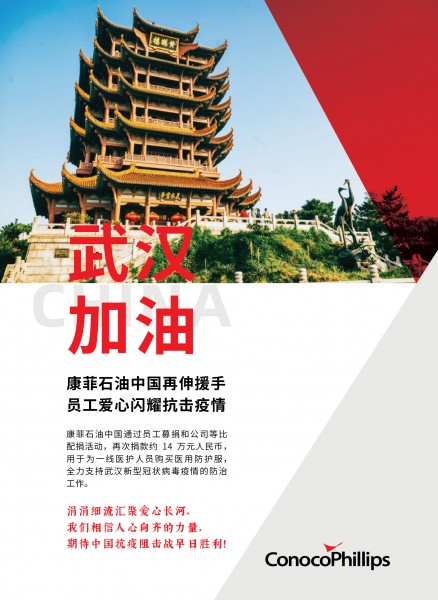 Headquartered in Houston, Texas, ConocoPhillips had operations and activities in 17 countries, $71 billion of total assets, and approximately 10,400 employees as of Dec. 31, 2019. Production excluding Libya averaged 1,305 MBOED for 2019, and proved reserves were 5.3 BBOE as of Dec. 31, 2019. For more information, go to www.conocophillips.com.