CHENGDU – On Oct.10, the final competition of FUTURE Energy Innovation Project (FUTURE), a cooperative venture between ConocoPhillips China (COPC) and Enactus China, was successfully concluded at Southwest Petroleum University. After a rigorous evaluation process, the research team from Southwest Petroleum University was named champion of the competition. 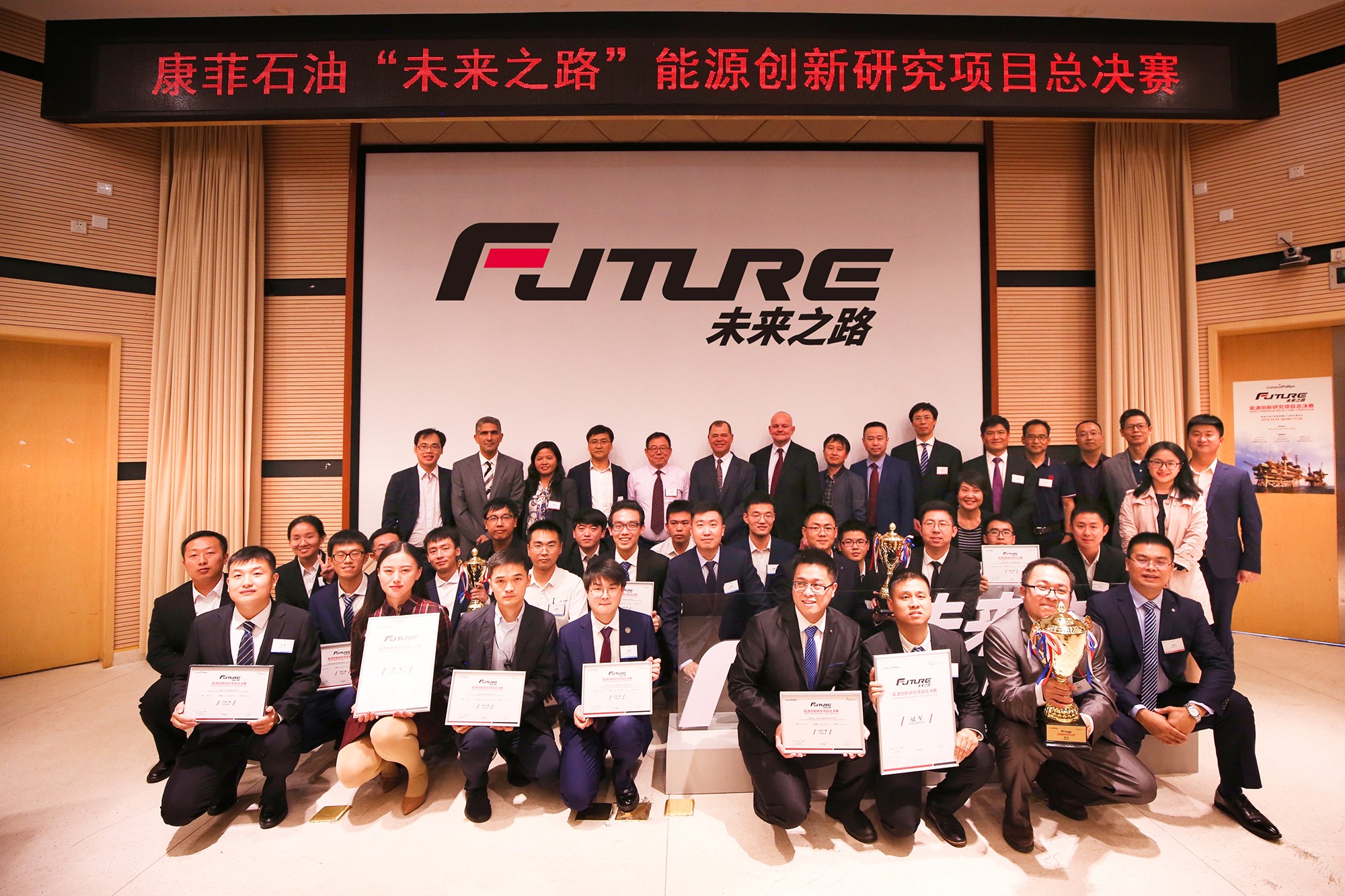 FUTURE generated widespread participation among research students throughout China and attracted 65 research teams and more than 200 students from nine targeted colleges and universities nationwide. After two rounds of review and industry experts’ guidance, eight teams were short-listed as finalists and invited to the final competition in Chengdu at the Southwest Petroleum University. There, they showcased their innovative energy solutions before a panel of industry judges. The selected 2019 Champion was the research of ‘Study on a Coupling Fluid/Geomechanical Method for Predicting Optimal Soak Time’ from Southwest Petroleum University. The second prize went to China University of Petroleum (East China) with the research of ‘Impact of Sequence Stratigraphy, Depositional Facies, Diagenesis and CO2 Charging on Reservoir Quality of The Lower Cretaceous Quantou Formation, Southern Songliao Basin China’. The third prize went to Peking University with the research of ‘Fracturability Logging Evaluation of Dense Reservoir and Its Application’. 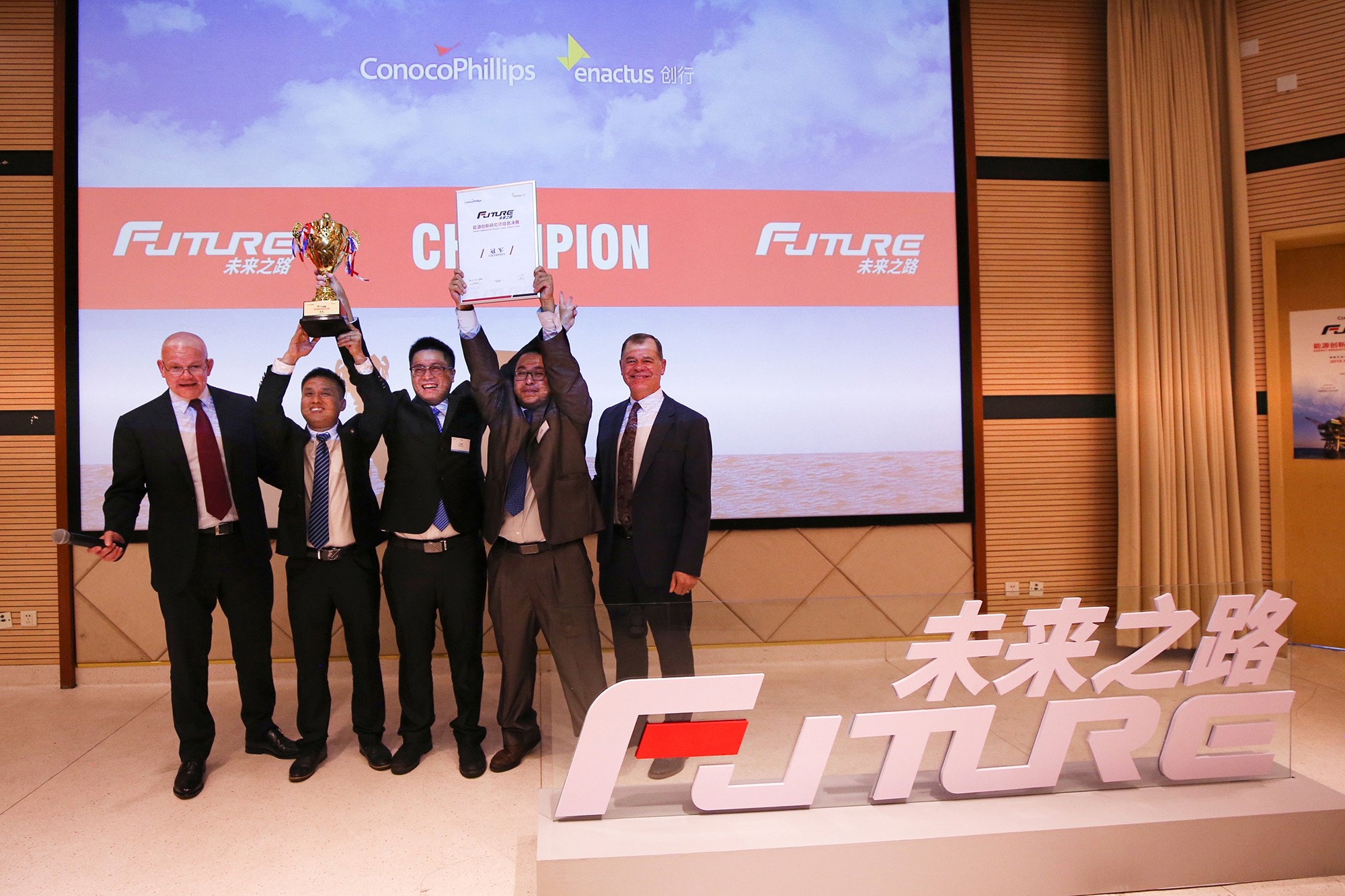 “As COPC’s flagship Corporate Social Responsibility (CSR) project, FUTURE aims to serve as a platform for promising young postgraduates to showcase and cultivate their talent,” said Bill Arnold, president of COPC. “This platform allows participants to foster in-depth exchanges with industry opinion leaders and their peers from universities nationwide. It also promotes talent cultivation that will contribute to the sustainable development of the energy sector in China and across the world,” Arnold said. 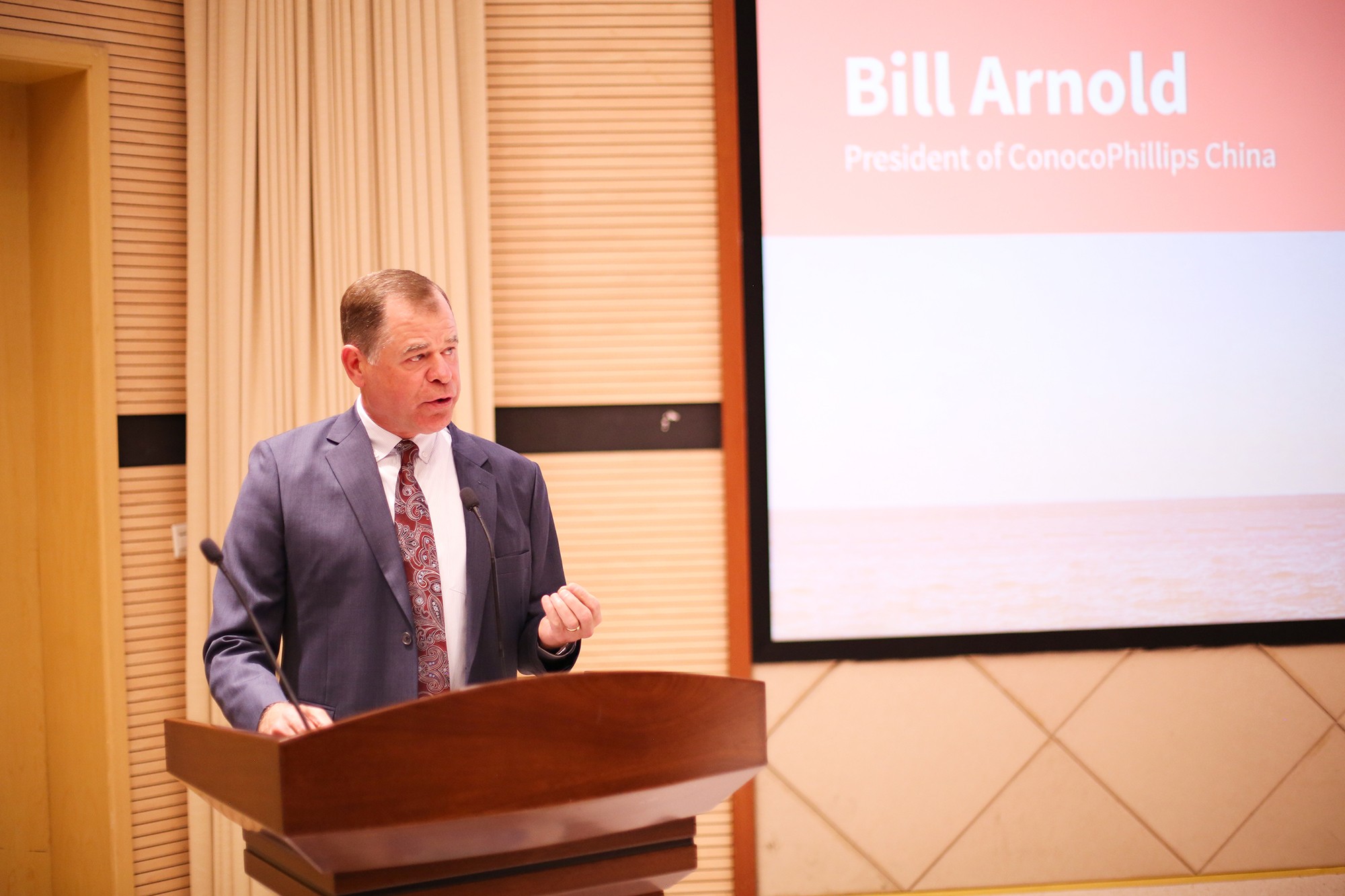 With a shared vision, COPC’s longstanding partners in China, including China National Offshore Oil Corporation (CNOOC), China Petrochemical Corporation (Sinopec Group) and China National Petroleum Corporation (CNPC), have supported FUTURE. They have also fulfilled a vital role by serving as judges in the final competition, along with senior engineers from COPC and professors from top universities. Together they evaluated and selected the top three teams.

“We are very honored to host this year’s final competition to accelerate the program’s success,” said Guo Jianchun, vice principle of Southwest Petroleum University. “I am proud that three teams from our university were short-listed into the top eight teams this year and very pleased to see our school crowned the champion. I am also glad that many promising students had the chance to attend the event to observe, learn and explore the energy industry with an innovation-aided spirit,” Jianchun said. 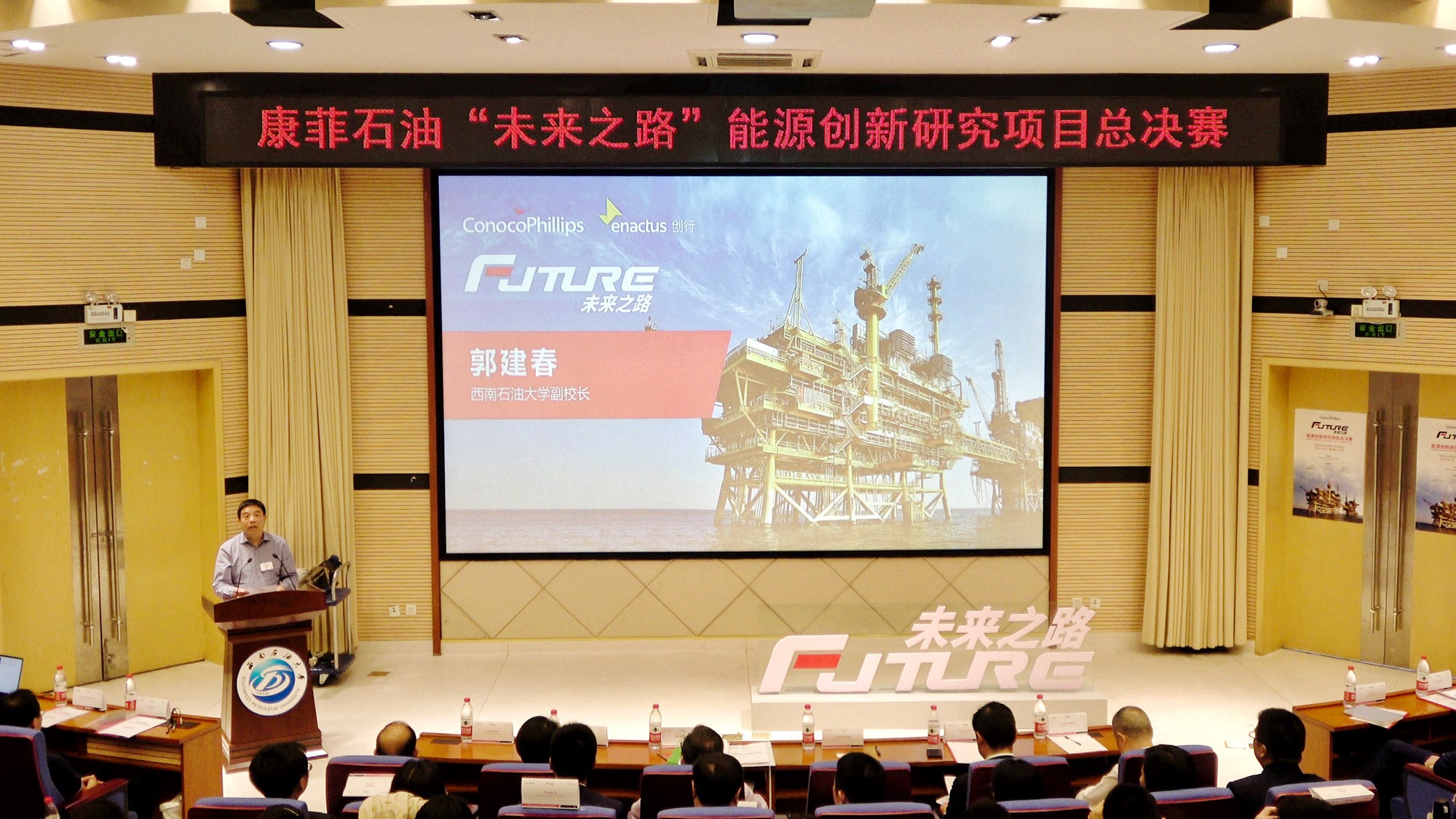 At the final competition, the eight finalists presented their innovative solutions for tackling technological challenges in compartmentalized reservoirs. They demonstrated new concepts, methods and creative approaches in a number of technical disciplines, including geology, geophysics and petrophysics, reservoir engineering, production and well operations. The research projects were scored based on their research originality, technical content, applicability, environmental sustainability and presentation. By including an emphasis on sustainability, COPC wishes to encourage future practitioners in the energy industry to integrate environmental considerations into their later research and decision-making processes.

“FUTURE has continued its success and become an innovative and forward-looking CSR model in the industry,” said Cathy Ren, general manager of Enactus China. “We hope to continue working with COPC in the future to spark new ideas and jointly promote youth development in China.”

In addition to being selected as the winning team by ConocoPhillips, the final winning team has been invited to participate in the upcoming Enactus China GO FOR THE FUTURE in May 2020. The team will present its research results and pursue networking opportunities with academic professionals and corporate executives. 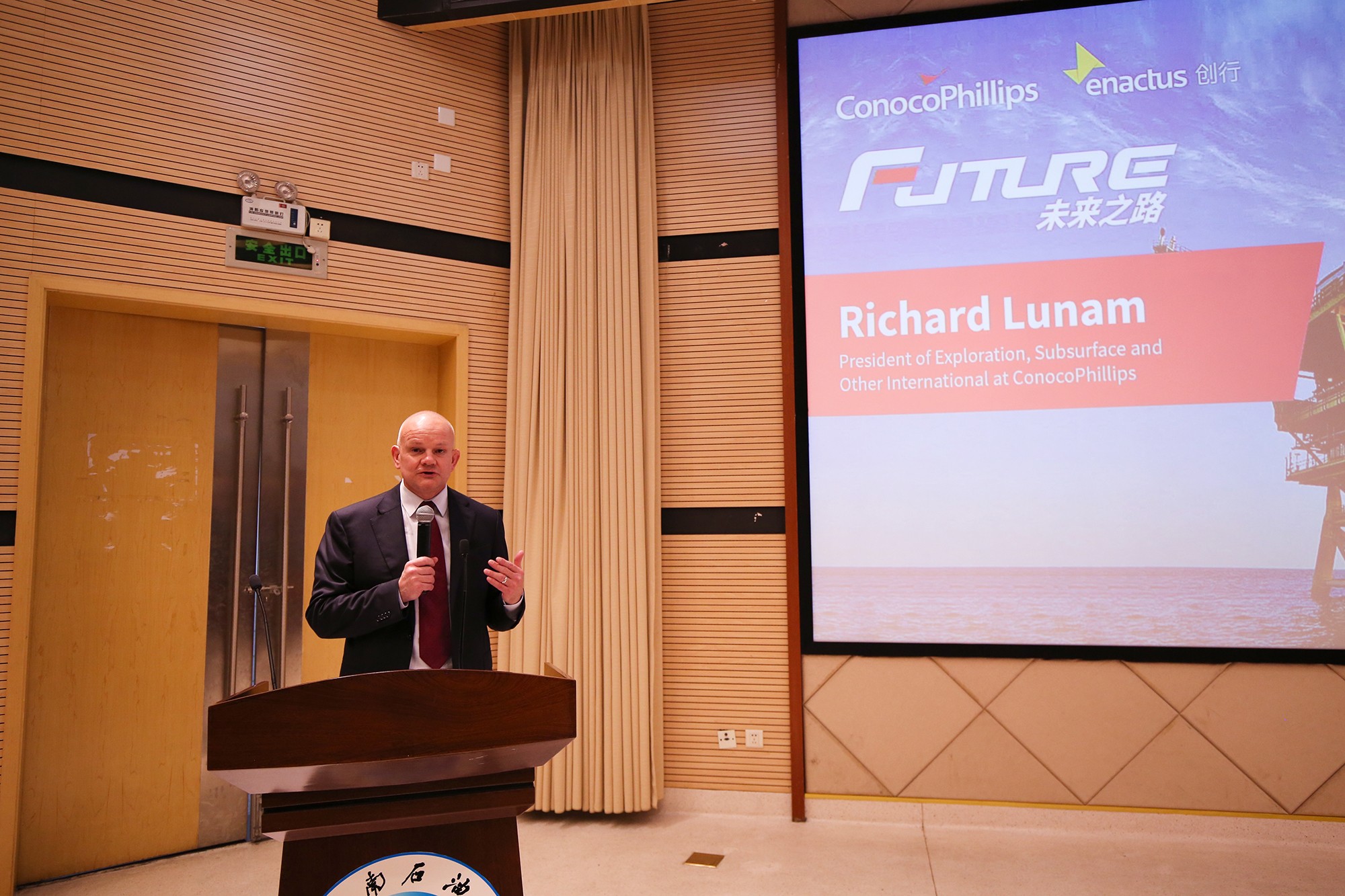 Richard Lunam, president of Exploration, Subsurface and Other International of ConocoPhillips delivering remarks

“I am honored to witness the FUTURE project and am overwhelmed at the enthusiasm for research and innovation shown by China’s young talent. They share our vision of pursing a better future through innovative energy solutions,” said Richard Lunam, president of Exploration, Subsurface and Other International of ConocoPhillips. “I sincerely hope these young people hold on to their passion for the energy sector, and continuously improve their knowledge and skills. This spirit of excellence will allow them the opportunity to reach their full potential in the future, and contribute to the development of the energy industry,” Lunam said.

Enactus is a community of student, academic and business leaders committed to using the power of entrepreneurial action to transform lives and shape a better, more sustainable world. Enactus currently operates in 36 countries around the world, involving 550 companies and 1,730 universities. In China, Enactus established its Social Innovation Program in 2002. After 16 years of operation, Enactus China now has 291 universities from 26 provinces or municipalities (including Hong Kong and Macau) participating in the program. For more information, go to www.enactuschina.cn.